I can’t believe it, but I am sitting right infront of it and can experience it first hand day after day, if I want to. But of course I can behave and control myself. Nevertheless, I am so happy to finally be right here, right now. The rework of my book is done. It is such a great feeling to have cleaned up passage after passage, add details, rework the phrasing and bring it all together. And now that is exactly what happened over the last weeks. Earlier this year I wrote that the book is done, but that was the first draft. Now I really consider my work on it done. And I am happy to have archived another goal that I set myself a long time ago. To give you an impression of its size, it consists of around 110k words which is about 660k characters. Whether I put the book somewhere so that people can read it or not, solely depends on my mood. At the moment I will keep it for myself and maybe present it to a few selected persons in my life to get feedback. But thats the tricky thing about feedback. Can you handle criticism on something that you have worked on for so long and put so much effort in? This book is not supposed to be published in any form, that was what I had in mind when I started it. So I would tend to say yes, I can handle it. Maybe those persons can give me another perspective, present ideas on how to improve the writing. We’ll see about that. The only thing I am still missing is a title. There has been a “working title” but over the time I worked on it, it seemed more and more not fitting. So, there is one final challenge to master.

As you all know, Corona has almost shut down every public activity with more than a few people. So, naturally, Nordlicht 2020 suffered the same fate, leaving me with no party to attend. As you might know I concentrated my work on that party in the last years, when I was not that active anymore. It was and kind of still is meaningful for me to support them and the party and hopefully I will in the future. And beside that, I do not want to do remote entries to other parties at the moment, because the feedback you get is sparse at best. It’s not comparable to a live event where you can talk to people about the releases and have a good time. So do not expect anything anytime soon.
What I am doing at the moment are two things. First and foremost, I am working on my new Album of my Studio Band “One Dice”, which will hopefully be released in Autumn – with one year delay, but more on that on the band homepage. The second thing I am working on is my book. I did write a novel for some time and finally got it finished this spring. But as you might imagine, It takes way more than just writing everything down. Now the reworking is taking place and I am enjoying that a lot, although it is a lot of work.
Over the next months I will put a lot of effort in those two projects and might release a track or two at an online demoscene event shortly before the album comes out. We’ll see. And then, ultimately, I hope to see some of you in 2021 at Nordlicht.

And we’re back from the partyplace. It was good, even just for one day. Meeting the old compadres from the group, like Veto and Peiselulli, and meeting new people, like Matt from HJB and Titus from Rabenauge and TMA was great. Arvenius, Sunspire, Kaomau, Dojoe and lets not forget to mention the people from Akronyme Analogiker, who I basically never saw inside the partyplace the whole time. Special shout outs to Demoscene Passivist at this point. It was a pleasure to meet you again, but lets be honest, once a year for a few hours is enough, isn’t it ? 😉
Anyway, moving on. My releases did as hoped and expected, if you with to summarize it. I did not have high hopes for the music, because it’s simply not the stuff for a demoscene party, but I wanted to get it out and it filled the competition well, taking into account that there were only 6 entries in total for the streaming music compo. My ANSI on the other hand did come in second place and that makes me really happy. I secretly hoped for that trophy to be mine and now it is! Thank you all for that. And it gave me a boost to work on new stuff to release next year. Well, that is a long time to go from today, but I will remember this Nordlicht for some time so it will pass faster than I think. I guess.
The releases will be uploaded once they are available on scene.org.

It is that time of the year again and this year it will be special for me. Why? Because I decided to visit Nordlicht Demoarty again. I was there numerous times, especially when it started 8 years ago. With this year, I think I will be there 6 of 8 times and I am somewhat looking forward to it. Haven’t seen those nerds for some time and really hope to catch them for a talk. I also did prepare something for the party competitions. I couln’t get it finished a 100%, but thats ok. I still think its good for what it is. My first time using Pablo Draw was interesting and the result is pleasing enough to enter it into the ANSI/ASCII competition, which will be held on friday. Since I am only going there on Saturday, I will not see it live, but knowing I have something with which I participated is enough to please that urge. Hopefully I will get another music thing ready for saturday and compete again. See you on Saturday!

The following comment does only reflect my opinion and although it does contain some generalizations, those are only my subjective view of things. So you might find yourself not agreeing with them and thats ok.
I made a lot of music. Thats a fact from at least my perspective. Amongst all the stuff i did over the years (since 1989), there was a lot of stuff that I consider plainly bad. Understandingly, many of those bad tracks are from the early days, where I learned to work with samples, soundtracker and all that stuff. Gladly only a few of those tracks miraculously found their way into the light. Most of them remain dead on old discs. And I am happy about that, because they are not tracks you want to listen to ever again. But on the other hand, they were necessary to progress with learning. I assume, nearly everyone who learned their way into an artform, has some of those examples somewhere. Highly talented persons excluded (but maybe not from their perspective).
And then there are those other tracks… END_OF_DOCUMENT_TOKEN_TO_BE_REPLACED

END_OF_DOCUMENT_TOKEN_TO_BE_REPLACED

This time I am going to support my fellow Onslaught members and their demoparty down under with an entry for the oldschool gfx compo. The party will be held in a month from now and that gives me time to get the graphics into an exe. It is a PICO-8 graphic done in Timanthes with the PICO-8 palette. So it does need converting. I am hopeful that there is someone out there, who can do exactly that for me. Plans are already in motion. My plan is to do more gfx stuff this year, especially for the Australian parties. It may all be PICO-8, because I found a liking in those format, which is restrictive in its colors and resolution, but open with the usage of it. There are no special modes (yet) like FLI, Interlace etc, like on C64, which make a decent looking multicolor graphic look pretty, well lame in comparison.  So, see you all at Flashback 2019! 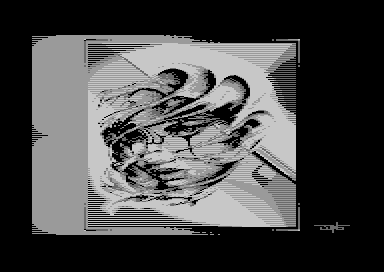